So I disappear from the blog for over a year and then just start posting again with no explanation? How dare I?

To be fair I actually started blogging again last year, but I’ve been doing it over at KennyRoy.com because, well, people actually read that blog. So general animation stuff goes there, and things that relate to me, but are also probably somewhat animation related will go here – but probably not as often as at the other site so go subscribe to that blog for more regular doses of animation goodness.

There’s a lot of stuff I’ve wanted to post, but now it’s sort of old news, so here’s one giant brain dump about everything that’s new in my life since I posted my 2010 demo reel last June. END_OF_DOCUMENT_TOKEN_TO_BE_REPLACED

Part of my match at the Airtight vs. Penny Arcade Ping Pong Challenge. Unfortunately, I lost the match 1:2 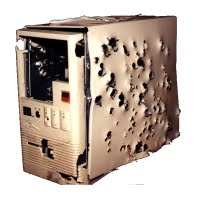 My computer just went to the big render farm in the sky.

The timing is pretty crappy as I was in the middle of a personal project, but I’m pretty sure all the HDD’s are fine – just the mobo has gasped its last. Looks like I’ll be replacing it a year earlier than planned, but considering this thing was already 3yrs old when I bought it used 3yrs ago and it could still do a good job of running simple Maya scenes I’d say it didn’t go quietly into the night.

Perhaps a trip to newegg.com will help me come to grips with my loss.

John Williams joined Southern’s art faculty during my junior year. If I had to pick one word to describe him, it would be “passionate.” The man was on fire for his beliefs, wouldn’t accept less than 100% from his students, and never held back criticism when it was needed or praise when it was deserved. I’ve never felt so afraid to disappoint, so encouraged to excel, or so rewarded for my efforts as I did in his drawing and illustration classes.

His children were born while I was a student at SAU. I only found out he was sick last week.

Thanks for everything, John. You will be missed.

Wait, is this Kotaku employee trying to get my identity stolen by filming my ballot entry for some Uncharted 2 swag? Aw, who cares, I’m on Kotaku!
http://blip.tv/play/gpk2gZ3TfgI
original source: Kotaku.com

I was adopted from the Seattle Humane Society on Thursday, January 17. I am a 3 month old Shepherd mix. I came into the shelter as a stray, so they don’t know who my parents are and they can’t tell by looking at me what I am for sure cuz I’m so young, but I certainly look like I’ve got some German Shepherd in me. I’m mainly black with brown on my legs and jaw line, white and brown on my chest and a brown patch on my bum that makes me look a bit like a baboon.

I don’t know how to animate yet, but I’m a really quick learner – when I’m not distrac… hey what’s that?