I’m learning to animate in 3ds Max for an upcoming freelance gig.

It’s a little like that episode in every superhero TV show ever where the main character loses their powers and has to go back to doing everything the hard way. They have an existential crisis, but then they realize that it was never their powers that made them a hero, it was their character…

…or maybe it’s just a matter of putting the right keys on the right frames. Could be that.

It’s actually a pretty comfortable transition thanks to 2014’s new “Maya Interaction” mode so I can use the Alt+Mouse viewport navigation that is so committed to muscle memory.

Kevin “KJax” Jackson shares this fantastic tip on a quick blocking workflow that is not only fast and simple, but keeps your blocking very easy to edit up until you commit to move on. The technique uses one of the many tools included in MGtools which comes in both free and paid versions. I already have a tool that my genius friend Anthony made that does the same thing so I haven’t checked to see if you need the paid version of MGtools or not.


Kevin was a year behind me in school and whereas I only had a brief stint at Rhythm & Hues he’s been there for about 5 years and has earned the role of supervising animator. His animation is not only imaginative and well polished, but he works quickly so it’s worth listening to any advice he has to share.

Update:Kevin has uploaded Part 2 in which he shows how the technique works in an actual shot with more complexity. He also shows off a few more of the many fantastic functions of the MGtools suite of MEL scripts.

I’ve been eagerly anticipating this one ever since they announced it. Then, after they released the Softimage version they went and made me wait for over a month to get the Maya version! Well, I guess that’s the reality of creating two complete, feature film quality rigs in separate packages. Check out the video below to get a sense of what this rig is capable of.

As a bonus you can also download a free version of Adam Burke‘s excellent abxPicker MEL script for Maya 2011+. I loved using the old, free version of this script and was sad when the new version for Maya 2011 was no longer free.
To get your copy of abxPicker and the Malcolm rig click on the image at the top of this article or, for you lazy types, just click right here.

Drawing is hard for several reasons, but one of the reasons is that it’s often hard to decide what to draw. Being loose and creative is easier said than done. I’m starting to look into ways to keep the pressure off and try to keep my logical left-brain out of the mix. Here are a couple of things I’ve found so far:

Keys to Drawing from Imagination

I borrowed this book from the library and though I only got through the first couple of chapters before I had to return it, I liked where it was going. The first step is to “doodle with purpose.” It’s easy to do and it makes a great warm up exercise. Parka has a great review of this book here. Actually, if you like art-of books or instructional art books Parka is a great blog to subscribe to.

This is an open source drawing application that is specifically designed to engage your right-brain. It has tools to automatically mirror and even a random brush that creates unexpected shapes that can then inspire you to follow a direction you would never have thought of on your own. It’s a bit hard to explain in words so check out this video of Alchemy in action if you’re interested:

There are quite a few examples from users on YouTube. 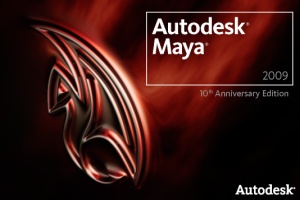 I’m still using trusty old Maya 7.0 at work, but I must say that for the first time I’m actually excited about a new release of Maya. Maya 2009 will include animation layers, a la Motionbuilder, which is something I’ve wanted since I started animating for games. Just think, if they decide to change a character’s idle pose you can simply slap that pose on a new layer in every other animation that needs to conform to that pose and you’ve got a non-destructively modified animation. Nice. Also helpful if you want to make several variations of similar moves. Other features include improvements to unwrapping UVs and easily rendering in stereoscopic 3D. Go to the Autodesk website to read more about it and watch some demo videos. 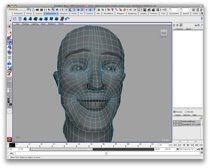 Independant R&D company Kickstand has some really impressive and useful deformation tools for Maya coming in the near future that will change the way people model and rig. Too bad you’ll have to shell out more cash for these. Hopefully Autodesk can integrate these features in a later release, but it seems to take them a long time to integrate tools that users have generated a long time ago.

I’m still waiting for Reflex to be released to the public.

Shortly after I learned about the amazing paint application, Colors! DS, two more DS homebrew applications came to my attention that are even cooler!

Animanatee is a simple, easy to use animation program (not to be confused with this guy) that allows you to export your scenes into .avi files. It has a very intuitive interface and once I loaded it up I was animating right away without needing to read any instructions. It supports 1 BG layer and 1 animation layer. It also has limited onion skinning, which only shows a ghost of the previous frame. You can’t zoom in to draw at higher resolutions so it gets tough to make consistent drawings and inbetweens, but for very simple things it’s ok. Here’s a quick bouncing-ball test that I made using Animanatee:

Flickbook is another pencil-testing software for the DS and I think it’s been around longer and has more users. I needed to read the instructions before I could make sense of the UI, but it does have some features that are more advanced than those in Animanatee. It has onion skinning for three frames in either direction, the ability to zoom when you draw, and the ability to cut/paste. I suppose I could deal with the clunky interface if I really wanted the extra features, but the deal breaker for me was when the application froze on me, but told me not to turn off my DS. I looked up the problem online and some people said that turning off the DS after a freeze caused them to loose data on their memory card. I’m not going to risk all my game saves because of a buggy application. I turned mine off with no ill effects, but I’d rather just stick to Animanatee. I’ll support the underdog with the fantastic usability, and hope that the features get updated.
UPDATE: There is, in fact, a slightly newer version of Flickbook (0.2.1) with some small updates that make a big difference. The interface is WAY better looking and the buttons are more recognizable for the functions they perform. Also added was the ability to flip through your drawings with the d-pad just like in Animanatee which makes it just feel SO much more natural. It didn’t crash on me either. It’s getting tough to decide which app I like better.
There is a third animation application for the DS that has my attention, but it is being developed for retail so it isn’t a homebrew application. It’s called Inchworm and it has VERY impressive drawing tools. It has a lot of the basic features found in Photoshop and Illustrator along with some basic animation tools. It looks like it will make it a lot easier to create full colour animation on the handheld, but it’s animation tools are not any better than the existing homebrew applications.

Even with their limitations these applications have gotten me excited again about animating traditionally. I can’t work up the effort to get my pegboard out of storage, punch paper, scan all the pages, and compile it. I also don’t have a tablet to be able to use some of the great PC applications. But I DO have a DS and I likes me some homebrew animation apps! There are better ways to animate, but having a pencil tester in your pocket makes it easy to get a quick animation workout while you’re on the plane, waiting for a bus, or sitting through a bad Hayden Christensen movie.

“Colors! is a simplistic digital painting application for Nintendo DS based on modern
painting-techniques developed for drawing tablets in programs like Photoshop. By
taking advantage of the pressure sensitivity of the DS touch-screen it becomes a
perfect portable digital sketch-book.”

This is what homebrew is all about, and frankly it’s the coolest thing I’ve ever seen on the DS. For those of you who have never heard of “homebrew” or thought the DS was only capable of playing games, check out the Colors! official website. There is a FAQ explaining what this homebrew stuff is all about and a gallery where you can see more really impressive paintings created with a DS and this brilliant bit of homebrewed software.

For another brilliant example of homebrew check out this video of a kid controlling his computer with his DS.